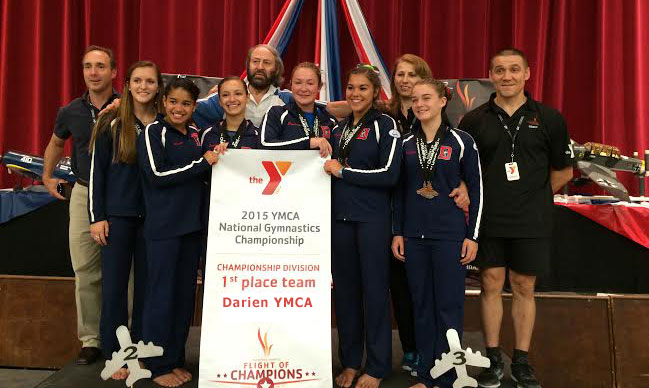 The Darien YMCA Travel Team is coached by a very talented team of Russian and Ukrainian coaches. Over the years the Darien Y has won the YMCA National Championship twice and placed in many USAG competitions throughout the United States. This is a highly competitive team requiring extremely dedicated and talented gymnasts.

Gymnasts are selected from our class program, pre-team or House Team, and evaluated for 30 days before becoming a member of our team. The Travel Team athletes are required to participate on all four Olympic events, and compete in as many as 12 YMCA and U.S.A.G. meets per season. Depending on the gymnasts level (evaluated by the coach) five or six day commitments may be required. Gymnasts have the option to move to the house team at any time.

The competitive season runs from January through July, however, the program and workout commitment run year-round.

The Darien YMCA House Team is for gymnasts who have progressed through the YMCA class program or have successfully demonstrated a mastery of skills required for level 4, U.S.A.G. The objective of the House Team is to provide a recreational gymnastics experience. Athletes have fun, pursuing their potential in gymnastics. House Team gymnasts are required to participate in at least three YMCA meets per year. Opportunities to compete in more meets will be available upon the discretion of the coach. Movement from the house team to the travel team is a decision also made by the travel team coach.

The Darien YMCA House Gymnastics program is generally viewed as an alternative to the Travel Team Program.